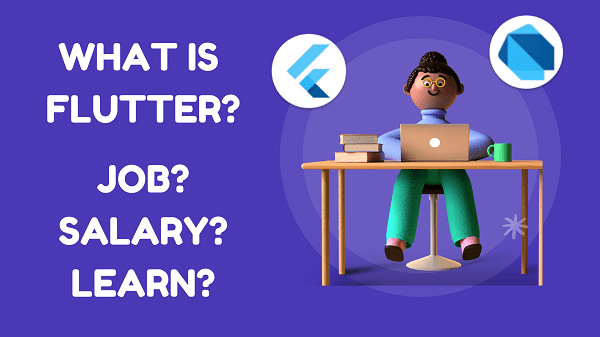 Flutter is an open-source UI toolkit for mobile developers, so they can use it to build native-looking Android and iOS applications from the same code base for both platforms. Flutter is also working to make Flutter apps for Web, PWA (progressive Web-App) and Desktop platform (Windows,macOS,Linux).

Flutter was officially released in December 2018. Since then, it has gone a much stronger flutter community.
There has been much increase in flutter developers, flutter packages, youtube tutorials, blogs, flutter examples apps, official and private events, and more. Flutter is now on top software repos based and trending on GitHub.

What is Flutter? this question comes to many new developer’s mind.

Flutter means flying wings quickly, and lightly but obviously, this doesn’t apply in our SDK.

So Flutter was one of the companies that were acquired by Google for around $40 million. That company was based on providing gesture detection and recognition from a standard webcam. But later when the Flutter was going to release in alpha version for developer it’s name was Sky, but since Google already owned Flutter name, so they rename it to Flutter.

Where Flutter is used?

Flutter is used in many startup companies nowadays, and even some MNCs are also adopting Flutter as a mobile development framework. Many top famous companies are using their apps in Flutter. Some of them here are

and many more other apps. Mobile development companies also adopted Flutter as a service for their clients. Even I was one of them who developed flutter apps as a freelancer and later as an IT company for mobile apps.

Before I tell you how Flutter works let me tell you first how other Framework works that existed before Flutter to make apps for Android and IOS.

So I started working in Flutter around start of 2018 and within 3 months, I was getting an offer for a flutter developer job. Also, since at that time in Gurgaon,India region, there were not many flutter developers available. So due to an increase in demand, I got higher pay than expected 🤑 , and since then, my career is going quite good 😀 .I changed few companies, and I’m quite happy that I switch to flutter, and that’s what I want for you also.

If you are still thinking of learning Flutter, this is the best time within 2 to 3 months after practice. You can easily get a job in Flutter with decent pay, which depends on the companies offering you. If you have more experience like 2 years or more years of experience, you can expect a more increase in your salary because of factors like work with flutter and your previous experience both count.

So what should you learn in Flutter?

Well the is no end of learning there is always something NEW, BETTER and MORE. Make sure if you are applying for a job, you should know these basic few things to make an app from scratch to the publishing of the app all by yourself, like Basic UI, BLOC, Rest API, Core Dart, Making plugins and Custom Widget, but if you are totally new in programming field then Algorithm is a must.
If you want a number of how much salary you will get, that depends on the region, company and your negotiation skills. But what I can say is you can expect minimum Rs 20,000 to 70,000 per month or even in 😎 SIX figure salary anywhere in Delhi NCR region.

If you want to learn Flutter, you can send us a mail us at [email protected] to know more about our live classes on Flutter, which includes Flutter for beginner topics and help you prepare for the interview process.
You can also subscribe to our YouTube channel for more flutter related tutorials or login to the navoki.com website to read more articles and learn more about Flutter.
If you like this article and make sure you share this on your Twitter and LinkedIn profile so that other developers like you could get some help and know more about Flutter.
To get started with Flutter you can install the Flutter SDK on the system and follow the tutorial.

YES ! , start today with Core Dart and then learn Flutter.

6 Things About HTTP Request in Dart For Beginners