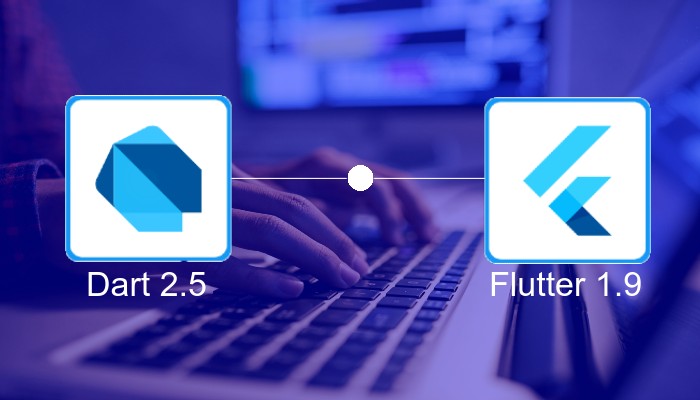 Hey, flutter developer, there have big surprises for you that is Google has launched flutter’s new version 1.9 as well as Dart’s version 2.5 with a lot of new functionality and features. If you do not hear it then just read this complete blog.

As you know flutter already provides powerful tools for building a good application, now flutter also capable to support Apple’s new macOS Catalina, as well as flutter also adds some new widget like SeelectableTextWidget which is used for select a text from the app.
The flutter 1.9 also provides the machine learning functionality which is helpful to developers for code easily.

Flutter 1.9 also marks a significant milestone for the framework. New projects of flutter by default taking Kotlin instead of Java for Android and Swift instead of Objective C for iOS, developers can change it and use Java and Objective C for Android and iOS respectively.
Google also reduce the problem in old libraries, for example, Navigator.pushReplacementUntil‘s problem which is not working before that’s resolved in flutter 1.9

Another major change by google is the new version of Dart 2.5 outside of flutter.  Dart 2.5 brings technical previews of two wild new features for the language.
That’s a mean developer from now can make a more efficient and good app using Dart language and flutter.
Google also resolves the problems in old libraries and includes new libraries also.


You can check the all change by google in flutter using click here, and Dart’s new changes by click here because the list is too long that is not possible to write here.